skip to main | skip to sidebar

Sankofa, or, The Sweet sounds of Eastern Market with Manatho Masani


In 2000, I went to a conference on metalsmithing and art metal in Birmingham, England. This conference was called "A Sense of Wonder". It was a meeting of the old, new and contemporary realms of metalsmithing in the English speaking worlds. I loved it. We art metal folks celebrated and communed. We also had music played for us in the Goldsmith's Church in Birmingham. Historically Birmingham, England, was the center of goldsmithing in the British Isles, going back to medieval times. The music was Baroque, and we conference-goers were privileged to hear and see beautiful classical instruments, including the harpsichord, a precursor to the piano.
When John Harrod conceived of Market 5 Gallery in the early 1970's, and later the outdoor arts and crafts festival at Eastern Market, music and performance were part of his mandate. On any given Saturday or Sunday during the middle of the afternoon, there were live jazz or blues jam sessions inside Market 5 Gallery. I mean, who can forget a performance by "Dr. Hot Pepper"? He played lowdown dirty blues. He stood out for his clothes alone, never mind his great blues voice. Then on the outside of the market was a older gentlemen who played guitar near "Ma Brown's"( Linda Brown) stand right next to the Farmer's Shed on Sundays. He sang and played like Ritchie Havens. I can still hear him belt out "Freedom" in my mind. Tom Rall (founder of the Flea Market at Eastern Market) recalls that ..."he use to sing 'Let the Sun Shine on Eastern Market' and (this song) could be so uplifting." I believe this man's name was Archie Stewart. This music was in the air around the market in those days.
And now ,thanks to Manatho Masani (nee Anthony Reddick) of ZimGems, 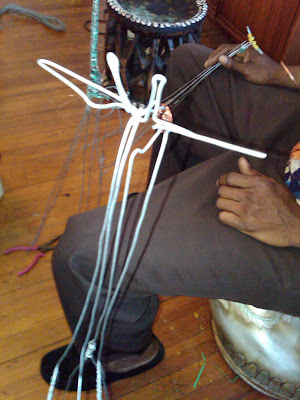 we at Eastern Market are again privileged to hear and see live music played outside at the Market. Mr. Masani, like longtime exhibitor Noor ul Islam, is a native Washingtonian. He was born in the mid 1960's and grew up in Northwest Washington D.C.. He went to McKinley Technical High School and later attended The New York Institute of Technology where he studied computer graphics.
Manatho Masani is a renaissance man. He is first and foremost an artist, but he is also an importer of craft objects from Zimbabwe, a writer, a performance artist and a businessman. How did this happen? If asked, Manatho will tell you that he started playing drums at eight years old. Drumming, he says, just came easily to him. At around the same time, he started drawing and created his own cartoon characters--creative expression has always been a part of his life. When asked how he was introduced to writing, he explains with a large smile that he was trying to impress a pretty young woman when he was in tenth grade; he joined the creative writing club to hang around her, and in the process ended up winning second place in the NAACP's National ACTSO competition. The poem was called "The Devil and a Drummer Named Tony." He also "got the girl"; Mr. Masani has charm. 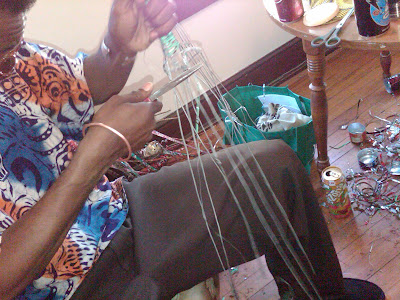 ( Manatho working in his studio on a large giraffe) 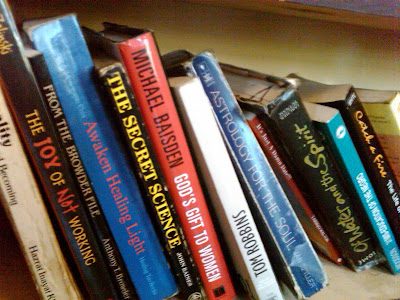 (Manatho's books on...)
Between too much math in the computer graphics program at college and starting his life as an importer/vendor/artist, he spent ten years working for the United States Postal Service on a machine loading mail. This machine taught him the importance of timing and working quickly with rhyme.
Manatho started vending "oils" in 1992/93. He had noticed from seeing other vendors how free they felt and he wanted that freedom. He set up his first stand in front of Tower Records in Washington, D.C.
In 1993 he discovered the Mbira. He told me the story of how this came about--ask him. It involves another attractive young woman. One starts to see a pattern.
The Mbira is an ancient musical instrument from the Shona people of Zimbabwe. It is believed to be over a thousand years old and is one of the first pianoed instruments. In traditional Shona culture the most import aspect of the playing of this instrument is to "... impart to- (the people)-wisdom, advice, forgotten family customs and protocol to ensure a healthy and successful family and community." 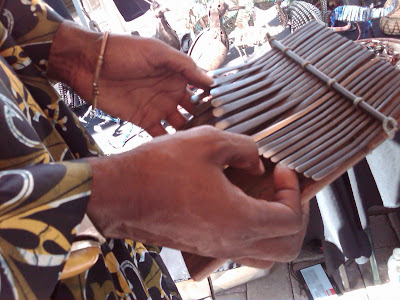 (Manatho Masani playing The Mbira)
Listen to the beauty of the playing and spoken words of Mr. Masani http://www.youtube.com/watch?v=LUB1I2t25L0 and http://www.youtube.com/watch?v=6fDyt9klXno
It is an interesting aside that this instrument is used in its traditional culture to call on the ancestral spirits. For seven years growing up, Mr. Masani lived between a church and a funeral home on eleventh and R street northwest. This foreshadowed his life to come as player of the Mbira. There is great spirituality in his playing. He is a believer in the metaphyical. He is an astrologer and numeroligist. He say's that through these studies he learned that "...working with anything that deals with metal relaxes me..." 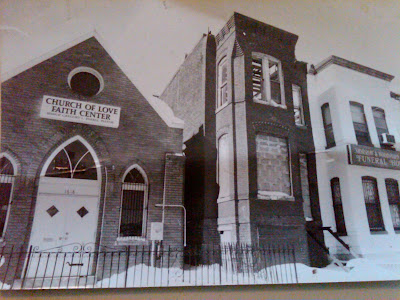 (Manatho Masani's home for the first seven years of his life)
In 1997 Manatho started playing "gigs" and played back up with another talented poet another attractive young women. (Did I mention that Mr. Masani is 6' 4", charming, dark, lean, has a smile for days and "ain't hard to look at") Manatho means -"thoughtful one"- and Masani means"-he who has gap in teeth" in Swahili.
By 2000, people had started hearing about his playing and he was headhunted by a national teaching program, Motivation Through Excellence.
This program moved him to Ohio where he taught drumming and Mbira in Charter Schools in both Columbus and Cleveland. He was part of the Mosaic Program.
Because of his virtousity with the Mbira, the principal of one of the Charter Schools' gave him the opportuntiy that changed his life. In 2003 he went to Zimbabwe to study Mbira with master teachers for a month. Manatho now travels almost yearly between his suburban Maryland home and "Zim" as he calls his other home.
In Cleveland, Ohio, he was also one of the artists chosen to do the "Street Beats" program. He was paid by the Cleveland art's council to bring music to the street of Cleveland. He says ..."this was a great gig."
In coming back to Washington, D.C., in 2006-2007 he was a participant in a D.C. Commission on the Arts and Humanities program that brought live music to local subway stations.
Also in 2006, Manatho Masani came to Eastern Market. Being from D.C. he had come to Eastern Market growing up and had always heard good things about it. Later when deciding to come and sell at the Market, he was looking for a place where he could find 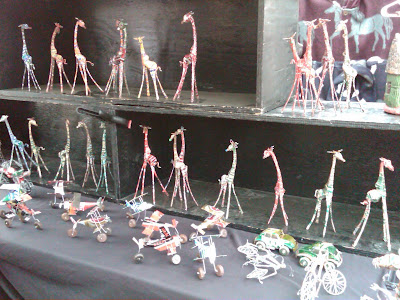 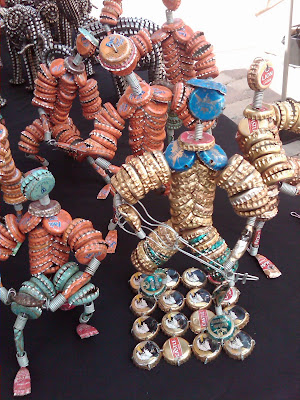 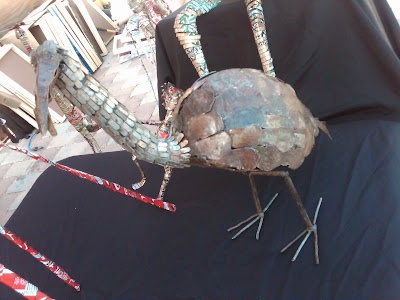 (ZimGems imported bronze scultpure)
customers interested in recyled art objects. He now makes woven animals sculptures ( mostly giraffes) out of recycled soda cans. He was taught how to do this after watching it being done in Zimbabwe. He also sells object d'art he brings back from "Zim", and, of course, he plays the Mbira. 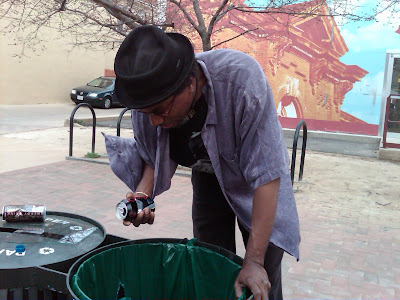 ( Manatho at Eastern Market searching in the recyling container for "good cans" with which to make his woven giraffe's)  http://www.getcanimals.com/
* Personal note- In my newsletter (Eastern Market: The Turtle's Webb Newsletter), there is often a section called "The Vibe on the Outside." Mr. Masani's music, the audience it attracts, and other exhibitors who sometimes have "jammed" with him inspired both the idea for the section and its name. Thank you 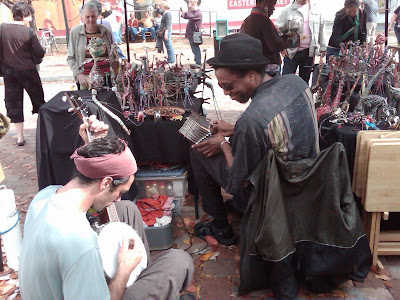 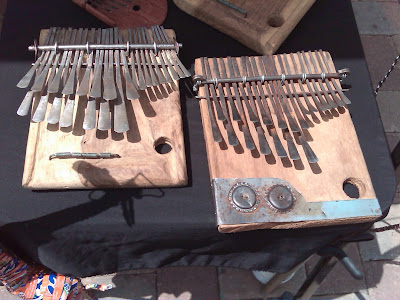 Witnessing,
(Manatho's stand at Eastern Market with Mbira's for sale)


(update:Washington Post Magazine
"He Makes Animals Out of Cans"

The Danger of a Single Story : Turtle's Webb Raising Hell At Eastern Market

Sonda Tamarr Allen
I have been told that one definition of art is creating order out of chaos. I am a gold and silver smith. I have been an artist at Eastern Market trading under the name Turtle's Webb in Washington, D.C. since 1991. "This is my story, this is my song..." _________________________________ James Balwin "One writes out of one thing only — one's own experience. Everything depends on how relentlessly one forces from this experience the last drop, sweet or bitter, it can possibly give. This is the only real concern of the artist, to recreate out of the disorder of life that order which is art." --from "Autobiographical Notes" (1952)